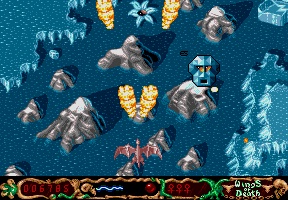 Released in 1990 on Atari ST(e) and Amiga, Wings of Death is a vertical shmup developped by the german team Eclipse Software and distributed by Thalion. As a true ode to fantasy, Wings of Death makes you be the magician Sagyr in his fight against Xandrilia, an evil witch. Metamorphosed into a bat by the traitor witch , the game makes you become a dragon, an eagle, a dragonfly or a gryphon. Seven worlds full of ugly beasts stand between the player and Sagyr deliverance from the mischievous spell.

THE STORY OF THE REMAKE

We are in 1991 when my eyes look for the first time at Wings of Death lovely screens. I am 16, I own an Atari 520 STe and I am more and more desappointed by its games each time I make the inevitable comparison between what I see on the screen of my TV and the Amiga screens on the box. When I insert in my computer the first disk of this game that everybody describes as a true gem of the ST, the masterpiece of the STe with the blitter acceleration, DMA sounds, 512 colors on the title screens, I don’t realize that soon I am going to forget all my delusions and grudges cause the game which is about to play in front of my eyes is going to change my mind forever. Suddenly lovely pixels come to fly and dance on the screen and gorgeous tunes from Jochen Hippel are carving an indelible print in my memory. I am facing the most beautiful game of the Atari STe, the Holy Graal and each of my wishes and dreams are about to come true.

Can we forget that kind of feeling even if time has passed, no, Wings of Death will always be for me a kind of reference in term of 16 bits vertical shmups. That’s why fifteen years later, when I discover Game Maker, something makes sense in my mind, « I will be the first one remaking Wings of Death« .

We are now in February 2006 the 23th and the hard work of remaking the game starts, Blazing Wings is born. At the beginning of the development, one level could be remade in one week. Always the same exercise, GFX ripping at first, creation of the sprites sheet and the tiles set and eventually remaking with Game Maker. The final release will come in 2010.

As a true remake, this is what Blazing Wings is made of :

Today, you can download the final release (1.1.4) from Blazing Wings for Windows OS.

– blazing_wings_114_full.rar [CPC Wiki] (many thanks to Gryzor from Atari-Forum for his help !)

If you want to support me, you can DONATE (via Paypal)

THE FUTURE OF BLAZING WINGS

Have a nice play but stay tuned for more cause more is to come in a near future in 2022… the Second Edition of Blazing Wings is already in development. This is the list of improvements this new edition will propose :