A game by Christophe ‘Aligarion’ Simon

In 1990, Z-Out is released on the Amiga by Advantec and published by Raimbow Arts and it is a great day in the history of horizontal shooters with its dark ‘alien-esque’ atmosphere even with a classic but above the average R-Type-esque execution. In Z-Out, your mission is to save the world (again) against an evil alien threat cam from the borders of space. As always, you are the last hope on Earth, the whole humanity is counting on you.

THE STORY OF THE REMAKE 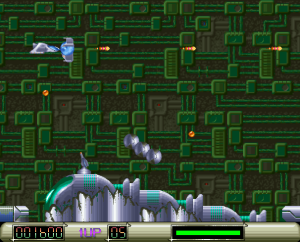 We are now in 2008 and everything has begun during the summer, whereas my work on Blazing Wings is still in progress, I started remaking one of my favourite horizontal Amiga shooter, Z-Out. A tremendous job is awaiting, six huge levels with massive bosses and angry enemies. The last level being one gigantic boss.

In may 2010, the 0.5.1 version of Last-Out is released and is made of the four first levels with remade GFX, remixed tunes of Chris Hüelsbeck and Rudolf Stember by Marco Marold (SunSpire) or « tfmx » Amiga soundtracks. More over every level background is no more static but made of multi-parallaxes layers which gives the game a depth feeling never reached before.

Since 2016, the development has been restarted, level 5 has been finished and a lot of hard work has been put in level 6 which is one of the hardest level in term of code.

In late 2019, the game is nearly completed. A lot of job remains, improvements, debugging, the remixes have to be completed by Marco, but the end is near.

In summer 2020, everything is gathered to complete the game. Only more development time will make the difference.

If you are waiting for the final release with every six levels, weapons, new functionalities and remixes, you can download the beta version 0.6.2, it contains the five first levels.

If you just wonder what is Last-Out and what makes the difference with Z-Out; as a true remake of our beloved Z-Out, this is what Last-Out is made of :

If you want to support me, you can DONATE (via Paypal)

THE FUTURE OF LAST-OUT

In 2021, the final version of Last-Out will be released, so stay tuned.

The last internal ‘beta’ version is 0.9.9.6.0 (22/11/2021), with bonus level (seven), level six, the extro, tons of bugs solved, a new interface, more weapons, some more audio gems crafted by Marco and has never been so close from completion.